Dastangoi is entirely new to me. It is an oral storytelling art form in urdu. The author is one of the youngest Dastongs ( which means storytellers ). Ankit Chadha have performed many dastongoi and his youtube channel, it may give some enlightenment about the art form , if you wish to know more.

This book reveals the life of Amir khusaru, who was a sufi musician , poet and scholar. He was also a mystic and spiritual disciple of Nizamuddin Auliya of Delhi and also the “Father of Qawwali”. 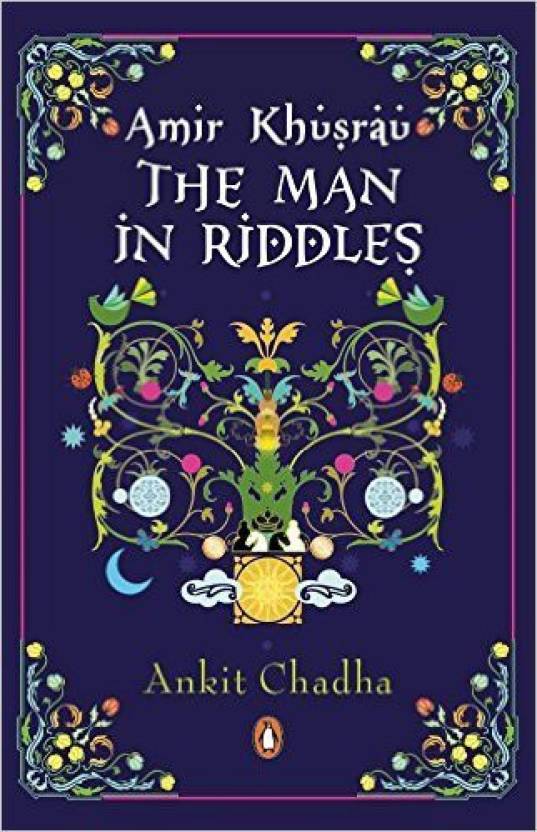 The book consisits of 20 riddles or puzzles which reveals the life of Amir Khusrau. The puzzles are both in Urdu/hindi and in english. The puzzle urges the readers to find the answers which are again given with beautiful illustrations. These illustartions are not seperate ones and goes along with the answers. The life of an poet is poetically revealed through this book.

The verses , puzzles and illustrations engages the readers along the line of the book till the end and at the end we have a greater satisfaction of knowing a great scholar and poet’s life through this. This book is also shorter with twenty riddles to its pages and it is a short read and doesn’t take much time. So if you don’t know the life of Amir Khusrau , this book will fulfill the wish of knowing him on reading.

Have a read and cherish the history of the great poet.

Flipkart : Amir Khusrau: The Man in Riddles by Ankit Chadha

I admire a lot and even dream a lot. In a country like India where people worship cricket as their religion and Sachin as their God and other players like his disciples and even other God’s. I’m no way different from them , I admired sachin a lot, like many people who was saddened by the retirement of ” God of Cricket”, i was also saddened.

I remeber in my childhood days, where I had heard of Karanm malleshwari and Leander Paes winning medals for India and then came Rathore who won a Silver medal for India. I haven’t heard tennis and also tennis was not even a great sport in India , until they heard the names of Roger Federer and then the likes of Rafael Nadal.

The tennis court was dominated by these two greats after the likes of Pete Sampras, andre aggasi , martina hingis, serena williams and Venus williams.

I still remember there was no facilities of home wifi and internet and the only way to know about sports is the “last page of dailies” and sportstar ( a weekly magazine which comes with a poster ).

The first tennis match which I saw in TV was the US open final between Roger Federer and Rafael Nadal and it was the first of it’s kibd where the rivalry between the two greats started. Eventually the ” King of Grass ” won the match defeating the “King of clay” in a epic match. From that tennis became a regular follow up due to the king of grass , “Roger Federer”.

Whenever a tennis season comes , I heard many asking to someone who is talking about tennis , ” What happened to Roger and Rafael”. They have even became the great tennis players , the world has ever seen.

I personally love to see the tweener shot of Roger , which he plays as a late shot inbetween the legs. I closely relate it to the present shots which steve smith plays in cricket.

I don’t compare other greats with Roger. I wish Roger a huge success in his forthcoming days. Let Roger wins as many grandslams as he can. I would love to see your tweener soon in several matches. Add some french opens as the collection of French Open is only in the starting Level.

Records are to be broken and I wish a happy birthday to my favourite tennis player of all time, “Fedex , JesusFed , Tweener Boy. Swiss Storm, Switzerland Express”, “King Of Grass” ,”Roger federer”.

I make this as a tribute design to my favourite player, “Roger Federer”

When 70% of the world is covered with water , the rest is occupied by laborers ( hard working people ). When May 1, comes everyone celebrates it as the Labour Day. The day that is totally dedicated to the working community. The day was fixed as the Labour’s Day , but it differs from country to country and in many of the countries it is officially celebrated on May1.

When every other special things have a specific day to celebrate , the day for labourers was a dream at those days and suddenly it was made official around the period when the eight hour movement cam into existence. But the history revolves into its own revolution and it has many reasons for this Labours Day.

A hundred times every day I remind myself that my inner and outer life depend on the labours of other men, living and dead, and that I must exert myself in order to give in the same measure as I have received and am still receiving.              ——    Albert Einstein

Everyone who works for his existence and living is a labour and I don’t like the discrimination’s surrounding the status decides their quality of work. I don’t have belief in  separating the works based on their work too. Everyone works for a living to lead a happy life.

People work with a smile even though they has many work pressure. The hard working category still exist and I take this as an opportunity to wish them a great success in their days to come.

All labour that uplifts humanity has dignity and importance and should be undertaken with painstaking excellence.            ———   Martin Luther King Jr

I also want to point out a small thing which comes to mind while writing this , Chennai is famous for many things and monuments and one such is Triumph of Labour statue in Marina Beach. It was kept to state that our people are hard working people.

Have a happy working year ahead.